COLUMBIA, S.C., June 17, 2019 (SEND2PRESS NEWSWIRE) — For historical film documentarian and author Sufia Giza, genetic testing took her down a rabbit hole of research that has spanned 30 years, uncovering intriguing evidence that not only affects her personally, but also deeply impacts the narrative of this nation as a whole. Her new book, HeTePu Publications’ “Moundbuilders of Ancient America: A Legacy Reclaimed,” self-published in conjunction with the notable Black Classic Press, is not only the story of her Black Amer-Indian ancestors, traced to a heritage of Mississippian Moundbuilders who were chiefdoms and queendoms, but also a more deeply complex and revolutionary reveal. 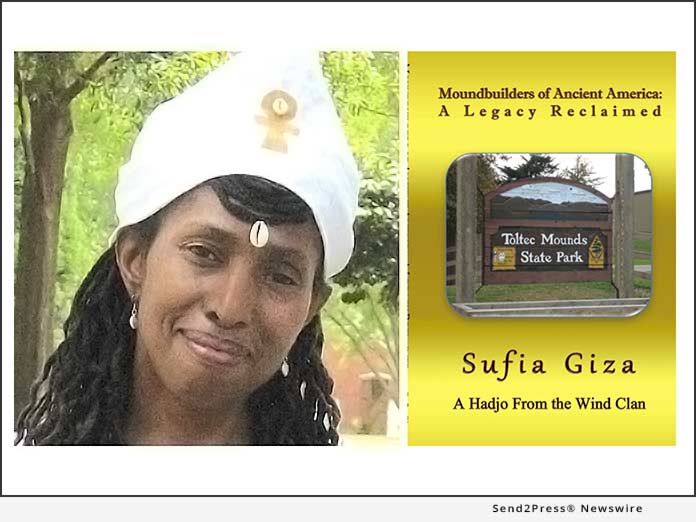 With the recent upsurge of interest in genetic testing, many Americans are eager to learn more about their ancestral roots, however, most pause their exploration after the initial DNA results come back.

A paradigm changer for true history buffs, in “Moundbuilders of Ancient America: A Legacy Reclaimed,” Giza traces the legacy of her roots to a people who lived in America and Meso-America between 50,000 BC and the present, as the original African descended Ameri-Indians, the authentic indigenous Native Americans, that most people have never heard of before. Giza will embark on a book tour this summer, that further espouses her findings, with stops in Columbia, Chicago, Los Angeles and Atlanta.

Ancient Americans were called Moundbuilders because they built monumental manmade, earthen buildings, similar to the pyramids in both Egypt and Mexico. With DNA results that trace directly back to the original Mississippian Moundbuilders, Giza was overwhelmed to discover direct lineage to the Queen of Cofetazque (Lady of Cifitachikee), who was kidnapped by and escaped from the 16th-century Spanish explorer and conquistador Hernando de Soto. In his journal, de Soto described the queen as “having the richest Grand Lodge I have seen in all of Peru or Mexico.” Another ancestral link led her to a warrior by the name of Tuskaloosa, who de Soto also took hostage and later killed on his 1540 journey, when he arrived in Alabama.

But Giza’s most surprising reveals were the similarities she began to notice in her research between the cultures of Africa, the ancient Mississippi Delta and Mexico. Her in-depth exploration and research, spanning artifacts, museum exhibitions, textbooks and interviews have led to discovering what she believes is a well-hidden fact, that America’s original indigenous people were African migrants who arrived in America first, pre-Columbus and before the Red American Indian.

“As an Indigenous American person in search of my ancestral culture, I have been grasping at straws from biased textbooks, survey reports, and outdated scientific paradigms in archeology and anthropology that obscure what is really true. So now, with my book, I have worked to find these hidden linkages to my ancestors, to discover who the original native Americans are, so I can document their past, in order to have a better understanding of myself, and others. Interestingly, after tracking all these generations of my folks being in North America, I am still 90% Sub-Saharan African. My opinion is, with my family still having so much African heritage, my ancestors had to have been African Native Americans, who migrated, from Africa, through Siberia in 50,000 BC,” espouses Giza.

Sufia Giza is a Gullah-Geechee artist from Columbia, South Carolina, who is a native of Riverside, CA. Giza has three degrees, including a master’s in Bi-Lingual/Cross-Cultural Educational Counseling. She has written two poetry chapbooks and produced five documentaries, including, “SANKOFA Study: An Ethnobotanical Research Project on Medicinal Herbs of Tobago, WI.,” “Toledo District Eco-Park: An Eco-Cultural Tour of Southern Belize,” “REGGAE MILITIS: The Bizness of Reggae Music” and “SANKOFA Study II: Medicinal Herbs of Trinidad and Tobago.” Most recently Giza completed the third part in her series on medicinal herbs, “Ethnobotany of the African Diaspora: South Carolina to Trinidad & Tobago.”

“Moundbuilders of Ancient America: A Legacy Reclaimed” is a fascinating historical resource. Giza lays bare, with meticulous detail, findings that connect the dots to not only her personal lineage, but to a past that has been painted over for centuries. Book tour stops include:

Watch the book trailer at https://youtu.be/V21v4OY4t0Y