RICHMOND, Va., Feb. 10, 2022 (SEND2PRESS NEWSWIRE) — The Richmond Environmental Film Festival (RVA EFF) announces its 12th annual showcase of over 20 free local and national films selected to raise awareness of environmental issues and offer solution-oriented messages of hope that inspire action towards promoting planet health and environmental justice. Most of the films will be shown virtually, with six in-person events hosted by partners of the festival. 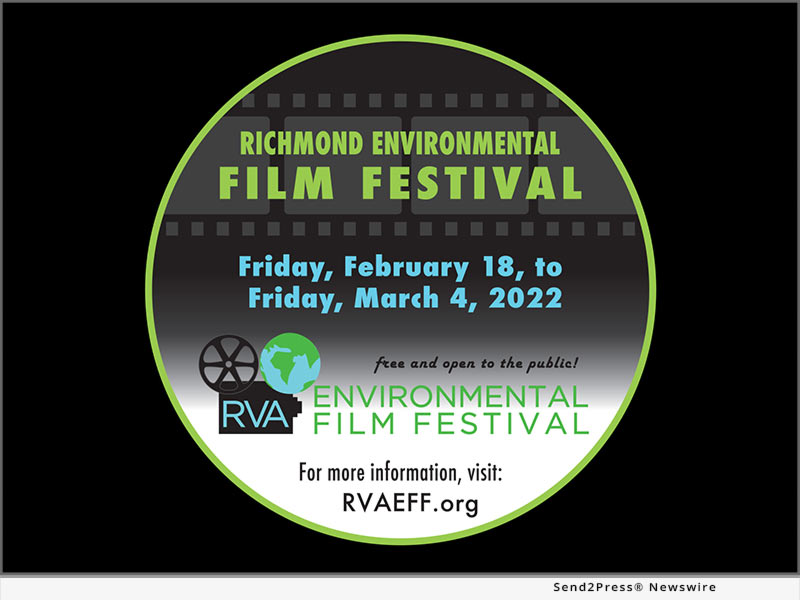 Again this year, RVA EFF held the Virginia Environmental Film Contest. First prize went to “Headwaters Down,” directed by Justin Black, Will Gemma, and Dietrich Teschner. This film tells the story of five friends who undertake a 13-day, 250-mile canoe adventure from the headwaters of the James River to the fall line in Richmond. Along the way, they explore the environmental and historical aspects of the troubled yet beautiful river as they witness first-hand the many factors impacting its future.

The two second prize winners were “Breathing Life Back Into Richmond,” directed by Jackie Stephens and “Canaries in the Coal Mine,” written, directed and produced by Nick Garnhart. Two youth awards were also given. All five films will be shown virtually the evening of Sunday, February 20. “Headwaters Down” will also be shown at The Byrd Theater on February 27. Some of the other films featured in the festival are highlighted below.

Visit https://rvaeff.org/ for a complete listing and schedule.

The festival begins with “8 Billion Angels,” hosted by James River Association. The film uses breathtaking cinematography to tell the truth about the conflict between the size of our global population and the sustainability of our planet. It inspires real solutions toward lasting sustainability and a better quality of life for all Earth’s inhabitants. The Virginia Interfaith Power & Light hosts “Mossville, When Great Trees Fall,” telling the story of one man who refuses to give up when his centuries-old black community, contaminated by petrochemical plants, faces the loss of its ancestral home.

The Richmond Public Library & City Office of Sustainability host “The Sacrifice Zone,” following a group of environmental justice fighters determined to break the cycle of poor communities of color serving as dumping grounds for our consumer society. “High Tide in Dorchester” focuses on ground zero for sea level rise along the Maryland portion of the Chesapeake Bay. Narrated by Kate Winslet, “Eating Our Way to Extinction” takes you on a cinematic journey around the world to uncover hard truths about the most pressing issue of our generation – ecological collapse.

The Festival Committee thanks all the major sponsors of this year’s festival, including Convert Solar, Enrichmond Foundation, and Ian Patrick of Merrill Lynch.