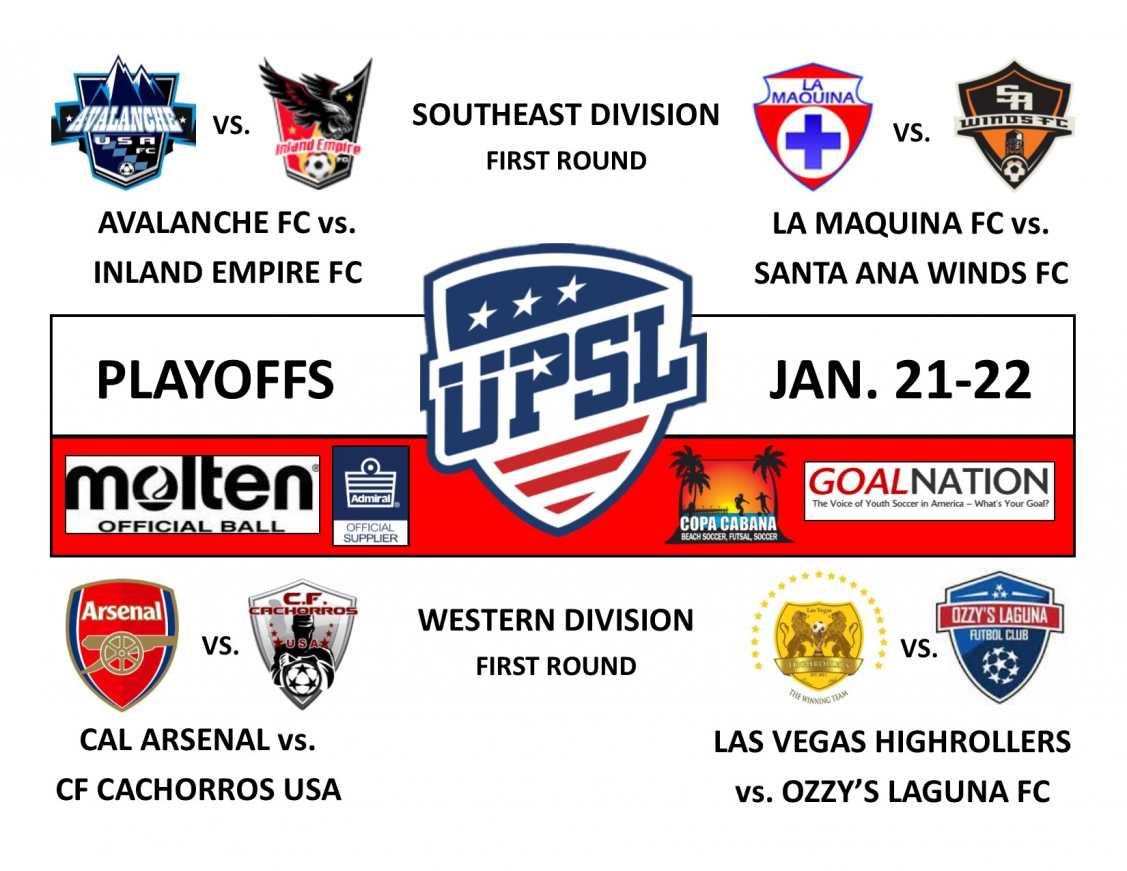 The matchups have been set, and it all starts tonight in Southern California.

United Premier Soccer League Commissioner Yan Skwara said, “This is going to be an exciting Playoffs and Championship to culminate what has been five months of hard work by our playoff-bound teams. We expect some very good play and physical matches, and our fans will be in for a treat. We wish all our teams the best of luck in the coming weeks.”

Santa Ana-based La Maquina FC (16-2-3) is looking to maintain its reputation as one of the UPSL’s elite teams. Santa Ana Winds FC (8-9-5) went 3-2-1 down the stretch to qualify for the playoffs.

In the Western Division, No. 3 Cal Arsenal hosts No. 6 CF Cachorros USA and No. 4 Las Vegas High Rollers FC play No. 4 Ozzy’s Laguna FC in the quarterfinals at 8 p.m. on Sunday at Lake Forest Sports Park.

Santa Ana-based Cal Arsenal (9-5-2), winners of three straight games, was one of the league’s streakiest teams. Another Santa Ana-based team, CF Cachorros USA (9-8-0), produced two four-game winning streaks of its own this season.

Las Vegas Highrollers FC (9-5-1) has a Plus-20 Goal Differential in 15 league games. La Puente-based Ozzy’s Laguna’s FC (9-7-1) are riding a four-game winning streak into the playoffs.

Both divisions will qualify two entrants into the UPSL Playoffs, scheduled to start Feb. 4-5.

The UPSL Championship game is scheduled for Feb. 18-19.

The UPSL was formed in 2011 and currently includes more than 50 teams in California, Nevada, Arizona, Idaho and Colorado.

The UPSL is the fastest growing Pro Development League in the USA, with 60-plus teams targeted for 2017 Spring Season. Each UPSL team is individually owned and operated, and is responsible for maintaining UPSL minimum standards.

More about:
Trending Technologies Launched By Ecosmob Are Arousing Interest of Client and Prospects in USA

UPSL teams are all eligible to participate in the U.S. Open Cup Qualifying Rounds through the league’s affiliation with the U.S. Soccer Federation (USSF) and the United States Adult Soccer Association (USASA).

More information about UPSL can be found at http://www.upslsoccer.com or by following the league on Facebook (http://www.facebook.com/unitedpremiersoccerleague) and Twitter (@upslsoccer).