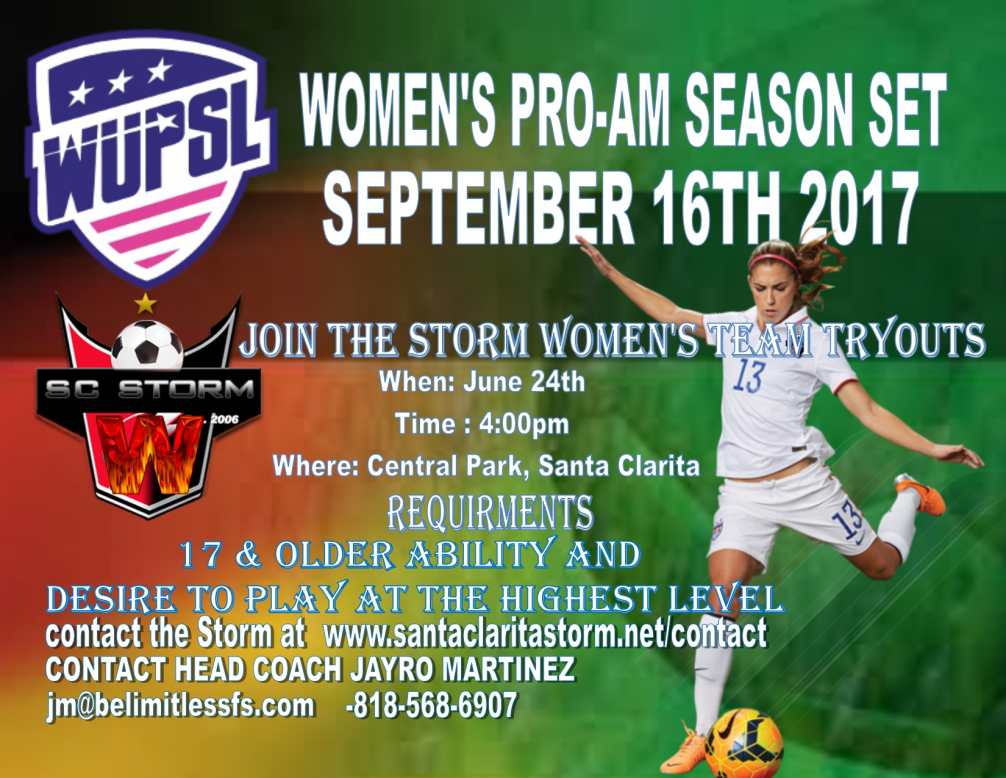 Storm’s Pro-Am team the Santa Clarita Storm announced it has launched a Pro Development Women’s Team and will begin play in the Women’s United Premier Soccer League in Fall 2017.

Santa Clarita Storm’s Women’s Team will be holding open tryouts Saturday June 24th Saturday  at Central Park 27150 Bouquet Canyon Rd Santa Clarita, Ca 91358  at 4:00 PM, and will be scheduling friendlies and exhibitions ahead of its entry into the Women’s United Premier Soccer League for the 2017 Fall Season.

Santa Clarita Storm  Women’s CEO Gerald Brunner said, “Launching a Pro Development Santa Clarita Storm Women’s  Squad is Opportunity to offer Women the same that the men’s side has had for over 10 years . The Storm has been working to assist men in getting the chance to display their talents to work towards the next level of professional soccer. It’s a good time to start the first leg of expansion with in the Futbol Club of Santa Clarita organization. The club is futurate to of acquired the services of Jayro Martinez who will not only head up the Women’s team but will be also working on another expansion plans such as the coming of the youth Academy.” Martinez will have the task following the tryouts to assemble the team train and prepare for the WUPSL season opener September 16th, 2017.   We will be playing teams throughout Southern California, and will be facing high level of talent in the WUPSL and will have the same focus as the men’s side to develop the game and the players for the next level of the sport.

Santa Clarita fully intends to form a strong competitive team as they have done with the men’s side. There will be preseason friendlies leading up to the season opener of the Women’s United Premier Soccer League.