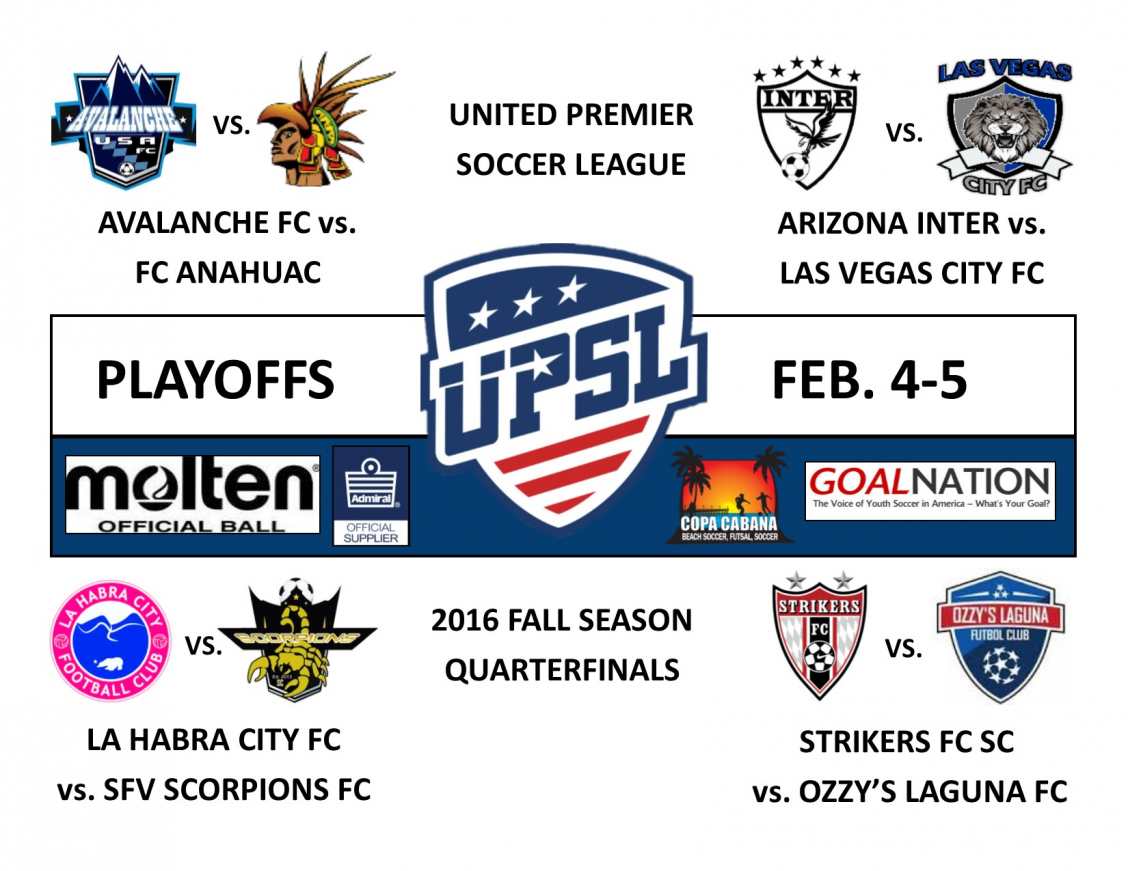 LOS ANGELES – Jan. 31, 2017 – PRLog — Two of the top teams in the United Premier Soccer League (UPSL) saw their postseason campaigns ended abruptly in Round 2 of the 2016 Fall Season Playoffs.

Unbeaten over its last six games, Avalanche FC (16-4-3) has now won consecutive playoff games for the first time in the team’s history. The club moves on to play Nevada Division No. 1 FC Anahuac (11-1-1), in the UPSL Quarterfinals, scheduled for Feb. 4-5.

Avalanche FC President Carlos Garrido said, “We’re excited (and) very anxious. We just have to keep a cool head, do what we’ve been doing at practice and work hard. The boys are really motivated and ready to go.”

Ozzy’s Laguna FC (11-7-1 overall) took advantage of its momentum to upend top-seeded L.A. Wolves FC, which came into the game carrying a 16-0-0 record for the Fall Season

Also in the Western Division, La Habra City FC got two saves from goalkeeper Jeff Salt in the shootout to defeat Cal Arsenal, 4-2 in PKs, after a 1-1 draw through regulation time.

Quarterfinal winners advance to the UPSL semifinals, set for Feb. 11-12. The UPSL Championship game is scheduled for Feb. 18-19.

The UPSL was formed in 2011 and currently includes more than 50 teams in California, Nevada, Arizona, Idaho and Colorado. UPSL is the fastest growing Pro Development League in the USA, with 60-plus teams targeted for 2017 Spring Season. Each UPSL team is individually owned and operated, and is responsible for maintaining UPSL minimum standards.

UPSL teams are all eligible to participate in the U.S. Open Cup Qualifying Rounds through the leagues affiliation with the U.S. Soccer Federation (USSF) and the United States Adult Soccer Association (USASA).

More information about UPSL can be found at http://www.upslsoccer.com or by following the league on Facebook (http://www.facebook.com/upslsoccer) and Twitter (@upslsoccer).