Hope International University proudly announces yet another remarkable first for its fledgling baseball program in the 2017 season ! 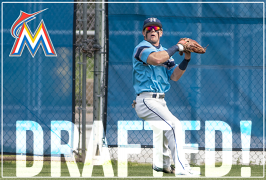 FULLERTON, Calif. – June 14, 2017 – PRLog — Hope International University proudly announces yet another remarkable first for its fledgling baseball program in the 2017 season – a player selected in the First-Year Player Draft of Major League Baseball. Royals centerfielder Cameron Baranek (http://www.hiuroyals.com/roster/15/16/2480.php) (JR/Orange, CA) was chosen by the Miami Marlins (http://m.mlb.com/news/article/236187130/marlins-wrapup-of-day-2-of-2017-mlb-draft/) in the ninth round with the 269th overall pick.

“I’m just so thankful to God for everything He’s done for me, and I could not be more grateful to the coaching staff and all my teammates for helping me along the entire way pushing me to always be better,” Baranek shares of his career at HIU. “[What we did this year], it’s a team effort, and we couldn’t have gotten [as far as we did] in 2017 without everybody doing their part.”

Additionally, the Royals Baseball and Softball teams both earned several notable recognitions from the NAIA Conference in their 2016-2017 seasons.

Baseball (http://www.hiuroyals.com/sport/0/16.php) set a number of new career marks and season bests over the course of their second season, including their first conference title, their first NAIA Opening Round Championship, and the result of that Championship, a trip to NAIA World Series. The final NAIA Baseball Coaches’ Postseason Poll ranked HIU #10 in the nation. And Cameron Baranek was named an Honorable Mention to the NAIA All-American Team (http://www.hiuroyals.com/article/1760.php). The team had ten fewer losses in their second season and fourteen more wins, pushing them to a 56-46-1 program record since the Royals’ program began back on January 22, 2016.

The Royals Softball (http://www.hiuroyals.com/sport/0/6.php) team finished their historic season with a program-best 30 wins against 17 losses after also setting the record for longest winning streak. The softball team had three players named NAIA All-Region in the 2016-2017 season (http://www.hiuroyals.com/article.php?articleID=1474): Alejandra Guillen, Crystal Cano and Justice Walker. Guillen is the first Royal to be selected as a First Team NFCA All-West Region player.