You are here: Home / Health / A Safer Alternative to Opioids for Treating Chronic Pain 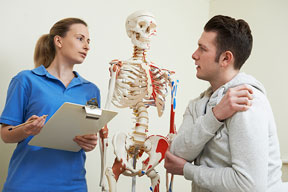 – Sponsored News – Three days.
That’s the maximum amount of time doctors are supposed to prescribe opioids for in most cases, according to the new guidelines the Centers for Disease Control and Prevention released in March in an attempt to reverse the mounting death toll from the overuse of prescription pain drugs.
But the guidelines are only that — voluntary standards — and a just-released survey by the National Safety Council shows just how difficult it could be to get physicians onboard: Not only did 99 percent of doctors polled say they prescribe the potentially highly addictive drugs for longer than three days, but — even worse, given their effect on the brain — 23 percent say they prescribe at least a month’s worth at a time.
“Opioids do not kill pain, they kill people,” says Dr. Donald Teater, the Council’s medical advisor.
So what’s a patient looking for a safer alternative for pain management to do?
With the CDC and others, including the Food and Drug Administration, advocating for alternative approaches to the likes of OxyContin, many experts recommend drug-free chiropractic care for those suffering from headaches and other neuromusculoskeletal conditions involving the back, neck and other joint-related extremity pain.
In fact, the whole “chiropractic-first” movement — over both prescription pills and elective surgery — is based on numerous studies showing it yields improved patient outcomes, higher satisfaction and lower costs.
“A more conservative and safer approach is needed, and yet you have 72 percent of doctors in the NSC survey prescribing opioids for back pain,” says Sherry McAllister, DC, executive vice president of the not-for-profit Foundation for Chiropractic Progress, noting that doctors of chiropractic have a minimum of seven years of higher education and use techniques focusing on conservative spinal manipulation and structural adjustments.
Learn more at F4CP.com.

More about:
Craigslist Banner Ads - Now You Have A Craigslist Ad Posting Alternative