CAMBRIDGE, Mass., June 25, 2019 (SEND2PRESS NEWSWIRE) — More than a quarter of people in America’s public places are somehow occupied with digital devices. That’s according to a new visual survey by The Technoskeptic. The magazine examined behavior at various urban crossroads across the country, categorizing different modes of digital distraction. The results make up the cover story of their summer issue, available nationally beginning June 24. 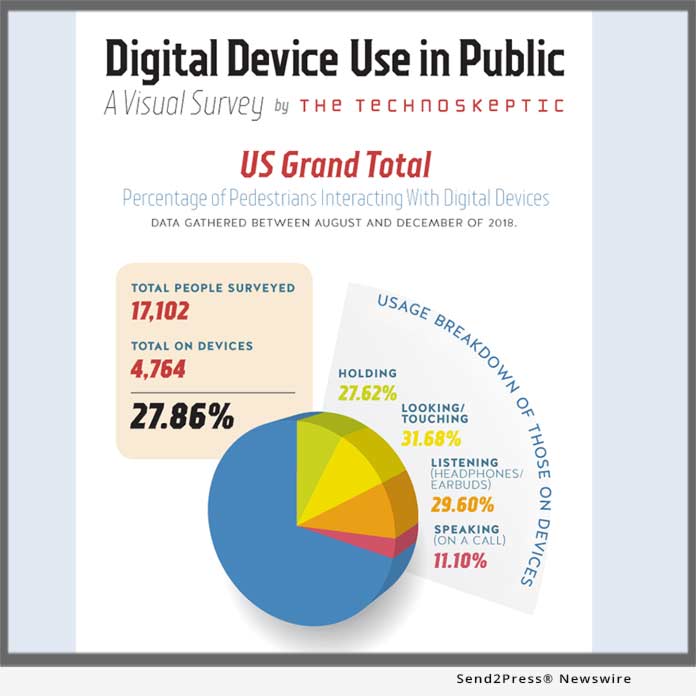 Overall, 17,102 people were tallied in 27 locations within 18 metro areas from coast to coast. Out of those, 27.86% were seen holding, looking at, listening to, or speaking into a device. The most distracted places in the survey were the downtowns of Detroit and Salt Lake City, clocking in with device rates of 49.15% and 46.20% respectively. The least occupied with devices? San Francisco’s Chinatown neighborhood at 8.46% and El Paso’s El Segundo Barrio at 11.29%.

The survey appears in an article about the smartphone’s effect on public space in Issue 3 of The Technoskeptic. Author Mo Lotman suggests that the smartphone’s vice-grip on human attention and its attendant shattering of the commons are the unspectacular, but ultimately more harmful, repercussions of a culture lost to tech addiction.

Just don’t try to read it on your phone while walking down the street – the article is only available in print.

About the survey:
Graphic representations of the data in PDF and GIF form can be found at: https://thetechnoskeptic.com/devicesurvey/

The Technoskeptic is a nonprofit organization taking a critical look at the impact of technology on society. The print edition of The Technoskeptic, published quarterly, can be found at select independent retailers and nationally at Barnes & Noble. Separate online content, including a podcast, is available at https://www.TheTechnoskeptic.com.

The Technoskeptic does not participate in social media.