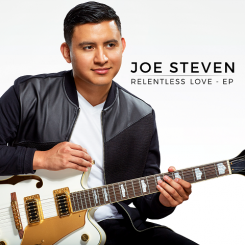 LOS ANGELES – April 28, 2017 – PRLog — Joe Steven has announced the release of his new EP titled “Relentless Love.” The singer/songwriter and multi-instrumentalist began playing piano at the age of 8 and has continued to compose songs leading up to his exciting debut release.

Joe Steven grew up with the power pop/rock hits of the 80’s and 90’s, a sound he adds a modern twist to in his latest EP “Relentless Love”. Each song on “Relentless Love” powerfully drives the listener towards the next track with Joe’s carefully orchestrated blend of grand piano, electric guitar and strings. This melodic mix is topped off by Joe’s confident and emotive vocals.

In pop songs, the word “love” often represents only romantic love.  All five songs on “Relentless Love” delve deeper into how love in the context of human connection can inspire hope and healing. “I would like for my music to inspire and drive greatness in people’s lives and above all to create a movement where people are able to encourage each other, be there for one another and serve the greatest truth the world has ever known,” says Joe of his intention for his music.

Joe Steven is a singer/songwriter, composer, producer and humanitarian. A self-taught pianist by the age of 8, Joe quickly became a student of music and added guitar, keyboards, bass guitar, french horn and percussion to his musical arsenal. In his teens, he was writing original music and performing with several bands, as well as singing with the Men’s Chorus at the University of North Texas and performing as principal trumpet for the South Texas Youth Symphony. As a Business Graduate from The University of Texas-Pan American he served as a Grammy U® Ambassador for the Texas Chapter of The Recording Academy®  during college, which taught him invaluable production skills.

More about:
What Does It Take To Be a Shen Yun Dancer