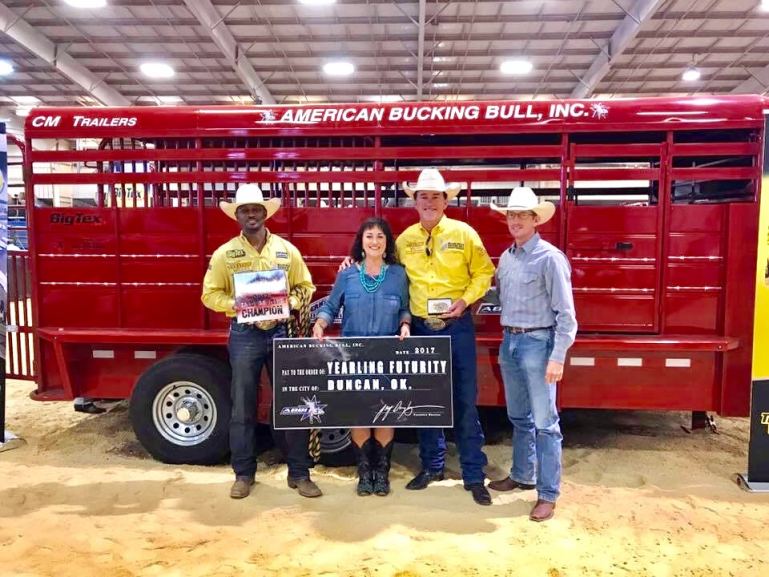 HOUSTON – June 13, 2017 – PRLog — The Jaynes Gang announced today a total of $70,000 in earnings this weekend at the American Heritage, the cornerstone event of the  American Bucking Bull Inc. (ABBI) that was held in Duncan, Oklahoma where over 400 bulls bucked at the Stephens County Expo Arena.

This event is the largest ABBI event of the regular season and the Jaynes Gang won the Yearling bull championship ($10,000), finished a career fourth ($25,302.88) in the two year futurity and placed with three other bulls in three different categories. In addition to the weekend’s competitive winnings, the Jaynes Gang was presented a $25,000 check for finishing second in the D & H Cattle Co. incentive earlier this year with 86/C Marty, a bull that finished fourth in the two year old futurity competition the next day.

“When you are competing against hundreds of bulls with champion characteristics, the details make the difference,” said Dennis Davis, President of the Jaynes Gang, Bucking Bull Games and the traveling partner of these bovine athletes.

Supporting the Jaynes Gang training efforts as the difference, Dennis Davis had this to say about the bulls bucking under their brand.

“When you are dealing with yearlings and young bulls, the best chance you have is to get them in a training program so they get a head start, it helps them to learn things that will keep them on their feet etc., so when you come to a big event like this with all the lights and sounds they are familiar and can settle down and buck,” explained an elated Davis.

The Jaynes Gang finished with three bulls in the top 20 where 80 bulls competed. SA612 Read Between the Lines, a yearling bred by Seth Adelhart, was the first place winner of the American Heritage Yearling Futurity winning $10,000 with an 87.67 point bull score for his six seconds of work. Adding to the JG bank was SA609, also from Adelhart, and EG 6027 Kimbo Slice, a bull bred and raised by Jaynes who were 5th and 16th respectively in the event designed for one year old buckers.

“612 went out a little far and worried me some, but he turned back so hard it was phenomenal and the judges rewarded him for that strength,” continued Davis who had skipped the American Heritage eve festivities the night before to run the bulls thru the paces and watch them to be sure they relaxed and ate in their temporary surroundings.

Billy Jaynes infamous program for bucking bull enthusiasts lost no time in announcing that this yearling winner, (SA612 Read Between the Lines) will be included in the Bucking Bull Games “All In Players Championship” Bucking Bull draft on November 3rd in Las Vegas. This event is produced annually by BBG and allows players to draft a one year old bull that will compete in 2018 for over a million dollars.

Later that evening, the Jaynes Gang lost no time in identifying the next super four legged super-stars and purchased 9 bulls at the annual D & H yearling bull sale which grossed over one million, three of which will be for sale from Jaynes.

Winning the American Heritage Futurity for two year old bucking bulls is high on Billy Jayne’s bucket list and 86C Marty gave him his best career chance and finish at this prestigious event. The bull sired by Page’s Stone’s Edge (Page 05A) was bred by D & H, but trained by Jaynes Gang, led the event for a significant period of time with 89.75 points. Marty was eventually edged out.

“We purchased this bull with the D & H incentive and he was a typical yearling, but after separating him and acknowledging his individual needs, Skinny, as Davis called him, came around and has averaged over 90 points in his last four outs in addition to earning $50,000 in the last 24 hours,” said Davis.

SA612 Read Between The Lines

Owner: BBG – All-In Bulls to be sold in the Vegas All-In Sale at PBR Finals

Owner: BBG – All-In Bulls to be sold in the Vegas All-In Sale at PBR Finals