You are here: Home / Computer / How Parents Can Have A Device-Free Meal with the Tap of A Button 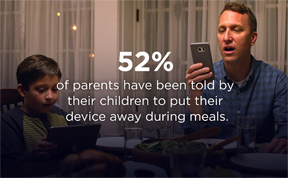 – Technology, the pletho- ra of devices, such as smart phones and tablets, and social media have brought convenience to our finger- tips today in ways that we didn’t know were possible just a few years ago.It has made life easier for families and businesses in so many ways, more than we can count.But, with that immediate grat- ification we, as a society, have some serious consequences to con- sider and address.A new Comcast survey shows that the majority of parents across the country believe that disconnecting from devices during mealtime improves family bonding, with more than 2 in 5 (42 percent) not able to remember the last time their family had a device-free meal.However, children aren’t the only ones to blame: more than half (52 percent) of parents have been told by their children to put their cell phones away during meals. A new DeviceFreeDinner campaign featuring comedian Will Ferrell captures this very issue. Comcast offers a solution for parents called Xfinity xFi, a new way for users to personalize, monitor, and control their home Wi-Fi, including the ability to instantly pause Wi-Fi connectivity by user or device.The "pause device" feature is the most popular xFi function, with users tapping "pause" about five million times since launch, most often between the hours of 6:00 p.m. and 9:00 p.m.Parents will be happy to learn that they are not alone in their concerns about screen time and its effects.Comcast’s nationwide study of parents, conducted by Wakefield Research, also found:* Dinnertime is bonding time -Nearly every (98 percent) parent surveyed agrees that disconnecting from devices during mealtime im- proves family bonding.* Millennial parents have an especially hard time remembering the last time they sat at the dinner table without a device at the table (49 percent), compared to Gen Xers (37 percent) and Boomers (33 percent).* Sneaking screen time – Par- ents admit to taking away their children’s devices an average of once per week and more than half (56 percent) have found their chil- dren trying to sneak their devices when they were banned from them.* Going to extremes to discon- nect – Nearly one-third (31 percent) of parents make their children leave their devices in a basket be- fore bedtime, while 14 percent go so far as to disconnect their modems to stop Wi-Fi usage.The American Academy of Pe- diatrics recommends that parents develop personalized plans for their children’s device use, warning that excessive screen time can displace important activities such as face-to-face interaction, familytime, outdoor play, exercise, and sleep."Technology should adapt to meet our customers’ needs, not the other way around," says Eric Schaefer, Senior Vice President of Internet and Communications Ser-vices for Comcast Cable. "With xFi’s ‘pause device’ feature, parents have the power to decide when it’s time for family members to connect with each other, rather than their devices."For more information about Comcast’s xFi, go to: www.xfinity.com/xfi.