You are here: Home / Health / Colonoscopies Get a Lot Easier Thanks to Technology 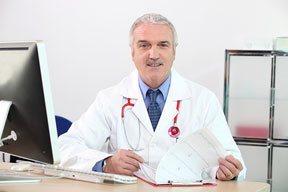 (NewsUSA) – Turning 50 seems to come with its own set of challenges, unlike any other age — be it mental, emotional or physical. It’s also when your doctor is likely to start urging you to get a colonoscopy even if you do not have any symptoms.
But what used to be an unpleasant, albeit necessary and routine procedure, has now become much less invasive, thanks to new technology. The “virtual colonoscopy” (or CT colonography) is now an option for most people who can’t or don’t want to get a standard colonoscopy. It’s being embraced by many doctors and insurers nationwide.
Like its traditional counterpart, the virtual colonoscopy entails drinking a laxative 24 hours prior to the procedure. Unlike the traditional colonoscopy, which involves a long camera-tipped tube, the virtual exam inserts only about a two-inch soft tube that sends small puffs of gas to fill the colon so that a low-radiation dose computer-assisted CT or “CAT” scan can produce two- and three-dimensional views of the colon. The entire procedure takes about 15 to 20 minutes, so you don’t need to be put to sleep and you can go right back to daily activities.
“It’s very good in screening, and the patient’s downtime is less,” Dr. Guy Barat, a radiologist at Community Hospital in New Port Richey, Florida, told the St. Petersburg Times in an interview.
Some diehard traditionalists opine that you still would need a traditional colonoscopy to remove anything found by a virtual colonoscopy. However, the vast majority of exams don’t find anything wrong, and the virtual test has been shown to dramatically increase screening rates. The virtual colonoscopy is an American Cancer Society-recommended screening exam. Even President Obama opted for a virtual colonoscopy over the standard test.
Experts say that the new technology can detect polyps the size of small blueberries, as well as cancer and other diseases. For the more than 140,000 Americans that are diagnosed with colorectal cancer every year, with nearly 50,000 dying largely due to late detection, this screening is vital.
The exam has been FDA approved since 1995, and major insurers, including Cigna, United Healthcare, Unicare, Blue Cross/Blue Shield and others, now cover their members for virtual colonoscopies to screen for colon cancer.
The American College of Radiology (ACR) says the last obstacle to tackle is to somehow get Medicare to cover beneficiaries for this life-saving exam so that seniors can have the same screening alternative as those with private insurance.
Currently, the U.S. Preventative Services Task Force is examining virtual colonoscopies. A “passing” grade from the USPSTF could lead directly to Medicare coverage under the Affordable Care Act.
For more information, please visit RadiologyInfo.org.

More about:
Sustained Happiness Starts from Within