You are here: Home / Health / An End to Acid Reflux? 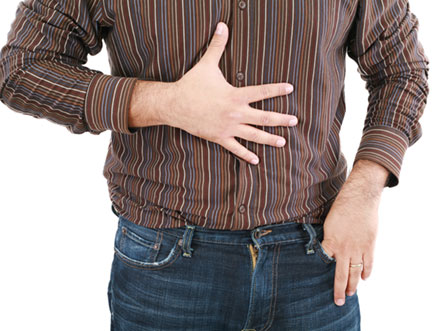 (NewsUSA) – Nearly everyone gets heartburn now and then. But the fiery sensation that grips your chest and throat after eating spicy food, for example, can also be a symptom of a more serious condition: gastroesophageal reflux disease, which in its most chronic form can lead to cancer.
For years, the roughly one-third of Americans with GERD have mainly relied on prescription or over-the-counter medications to reduce stomach acid. However, as we’ve learned more about the potential long-term effects of the newest class of drugs called “proton pump inhibitors” — which now take up more space on the shelves than good ol’ Tums ever did — that’s made for a different kind of heartburn.
“The Food and Drug Administration has issued numerous warnings about PPIs, saying long-term use and high doses have been associated with an increased risk of bone fractures and infection with a bacterium called Clostridium difficile that can be especially dangerous to elderly patients,” the New York Times has reported.
That helps explain the current excitement over a simple outpatient procedure that may actually correct GERD for good without the need for invasive surgery.
Stretta Therapy (www.stretta-therapy.com), which is FDA-approved, uses radiofrequency (RF) energy delivered to the muscle between the stomach and esophagus to, in effect, “remodel” the problem area.
“The sphincter muscle gets thicker and stronger, so it won’t open as easily,” explains Dr. Mark Noar of Endoscopic Microsurgery Associates in Towson, Maryland, who performs the procedure in his own practice.
Dr. Noar is also the lead author of a newly published, peer-reviewed study that tracked patients for 10 years after receiving Stretta Therapy, which is covered by most insurance (including Medicare). Among the most remarkable findings: 72 percent were found to have remained GERD symptom-free.
That’s almost a job requisite for someone like Kathleen Dickinson, who — loathe to even consider surgery — sought the doctor out for Stretta Therapy after what she describes as “years of suffering” and concerns about possibly developing osteoporosis from the medication she’d been taking.
“For me, it wasn’t just that I couldn’t enjoy my favorite dishes,” says the 70-year-old Maryland woman. “I’m a corporate trainer, and the constant coughing and clearing my throat affected my speaking presentations.”
She’s now back to eating Mexican food.
Oh, and one final reminder: While heartburn may be the most common symptom of GERD, it’s not the only one. Others include chronic coughing, sleep apnea and a change in voice.

More about:
Empowering People to Regain Their Mobility