Lisa Davis finishes a marathon on all seven continents in just seven days. 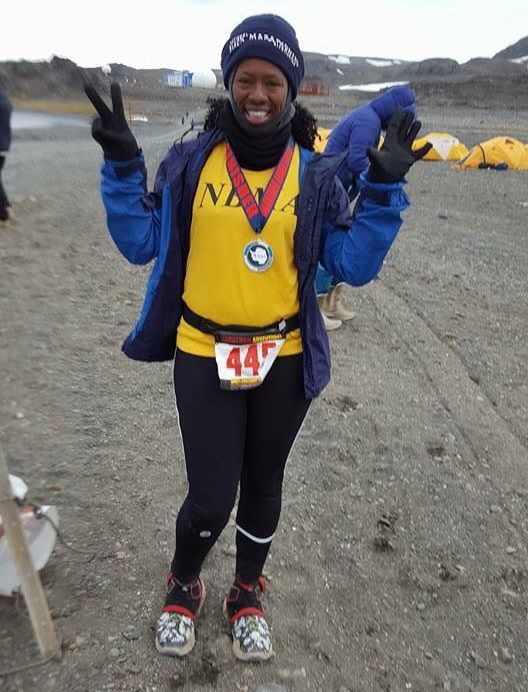 Lisa said, “It was really tough! I had to dig deep to get it done. Being sick made it much more challenging.” Her motivation to pursue marathons was Oprah Winfred. “When I realized that Oprah ran the Marine Corp Marathon, as a Marine, it motivated me to run the race. I’ve been running ever since. Also, this wouldn’t have been possible without my supportive husband.”

The last twelve months have been busy for Lisa. She also became one of fewer than 100 people in the world to accomplish the “marathon hat trick.” In addition to finishing marathons on the seven continents, she ran her hundredth marathon on March 13, 2016 at the Newport News (VA) Marathon. And on September 4, 2016 at the Kauai (HI) Marathon, she completed running marathons in all fifty States.

Lisa, a native St. Louisian, is a member of several running clubs, including the National Black Marathoners Association (NBMA). Tony Reed, the NBMA’s Executive Director and marathon hat trick finisher says, “It takes a lot of energy to run one marathon. But to run seven marathons in seven days on seven continents takes a lot of stamina and focus. It becomes more mental than physical.” Lisa went on to say, “When my body feels tired and my mind starts to waiver that’s when I run from my heart. I just dig deep….forward relentless progress!”

She’ll be recognized for her accomplishments at the NBMA’s Distance Running Hall of Fame Banquet at the GO! St. Louis Marathon on April 8. For more information, visit