You are here: Home / Entertaining / ‘A Sunday Horse’: This Year’s Heartwarming Horse Story 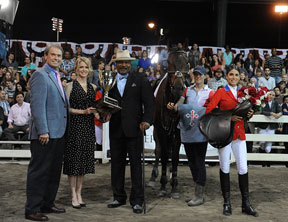 (NewsUSA) – A talented young woman and her horses defy the odds to rise to the top of the show jumping world in a new family film, "A Sunday Horse," scheduled to debut in 2016.The movie is inspired by the true story of Debi Connor, a rider and trainer from Ocala, Florida. The story is set in the present, although the main events occurred in the 1980s. The star of the film, Debi Walden (her maiden name), has drive and talent, and dreams of becoming an Olympic champion in the sport of show jumping. Unfortunately, she lacks the money and resources to train for the top tier of the sport and she is unable to afford the expensive horses needed for Olympic-level competition.Debi defies the odds, doing farm chores in exchange for training and earning the emotional and financial support of an African-American entrepreneur with similarly humble beginnings. She buys several horses with no formal jumping skills, trains them herself and starts taking the Grand Prix jumping world by storm. When Debi and her horses make the U.S. Olympic team, her dream is within her grasp, but an accident during a training exhibition leaves her comatose and paralyzed. When she finally comes to, Debi sells her top prize-winning horse Touch of Class to her co-trainer, who takes the horse to the Olympics and wins a pair of gold medals for the USA.Despite a dire prognosis of never riding again, Debi perseveres through months of painful rehabilitation and enters the Governor’s Cup at the Virginia Horse Show, where, despite her ongoing struggles with paralysis and seizures, she competes against her old horse Touch of Class and wins.A "Sunday Horse" features a well-known cast, including Nikki Reed (Twilight), Ving Rhames (Mission Impossible), Ryan Merriman (Final Destination), and screen legends William Shatner (Star Trek) and Linda Hamilton (Terminator). The director is Vic Armstrong, renowned stunt coordinator and second unit director on hundreds of films including Indiana Jones films, Terminator 2, Mission Impossible 3, and six James Bond movies. Armstrong has a personal connection to the story: He is a lifelong horseman whose father coached Great Britain’s equestrian team for five Olympic Games.The film premieres at the Equus Film Festival in New York in late November 2015.To learn more, please visit www.festival.net. The film premieres Saturday morning during the Li’l Herc Family Fest at the Equus Film Festival in New York.