You are here: Home / Health / 4 Tips to Start Your Day a Little Earlier 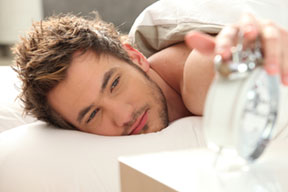 (NewsUSA) – If you happen to be a person who just can’t seem to find enough hours in the day, it might be time to get an earlier start. And, if you’ve already tried waking up before sunrise, only to meet a crashing halt following lunch, these four tips may help:
Tip 1: Avoid hitting “snooze” at all costs. Try moving your alarm clock far enough away from the bed so you’ll be forced to stand up and walk to turn it off.
“When you hit the snooze button repeatedly, you’re fragmenting what little extra sleep you’re getting, so it is of poor quality,” says Robert S. Rosenberg, medical director of the Sleep Disorders Centers of Prescott Valley and Flagstaff, Arizona.
Tip 2: Fuel up with a hearty breakfast. So, you’re probably tired of hearing this advice by now. Yet, if more people actually followed through with it, there wouldn’t be a need to stress it over and over. According to a January 2014 Penn Schoen Berland study, although nearly 85 percent of Americans believe breakfast is important, just over half say they choose to skip it because they don’t have enough time, would rather sleep in or don’t like preparing it. If time is really an issue, consider quick options like Hormel Compleats breakfasts (www.hormel.com), which can be ready in just 60 seconds.
Tip 3: Power up with protein. According to health.com eggs –and even bacon — can be potent breakfast options to keep you going and give your body the energy it needs to get through the day. Some easy-prep breakfast options — like the Compleats varieties mentioned in tip number two — even feature eggs.
“Eggs are a great source of nutrients,” said Mitch Kanter, Ph.D., executive director of the Egg Nutrition Center. “Just one egg contains 13 essential vitamins and minerals, high-quality protein and antioxidants.”
Tip 4: Set an earlier bedtime. If you are a night owl by nature, but want to start your day sooner, gradually shift your bedtime earlier each night. Once you find a time that allows you to wake up early and get through the day without feeling like you need a nap, stick to it. The most productive early birds aren’t sleep deprived. As Aristotle noted, “It is well to be up before daybreak, for such habits contribute to health, wealth and wisdom.”